Why to smoke the meat?
Back in the days, smoking the meat was used as a way of preservation the food, since smoked meat can be saved for a longer period of time. By smoking the meat, the appereance of bacteria in meat is disabled, as well as it’s deteoriation from exposure to air (oxygen).
Secondary feature (and more important one today) is the specific and delightful smell and taste of smoked meat and meat products. For smoking, the most common types of woods are oak or ash tree, or the scraping of wood from beech. The evergreen tree is not used because it contains various resins from which meat can have bad taste and/or smell.
Today, for enhancing the aroma, there can also be used materials like scrapings of barells in which wine used to age, or even whiskey and various spices or exotic tree species. Coal of any kind is not used, because of unpleasant aroma that it leaves on the products that are going throught the smoking process.
Before the smoking, raw pieces of meat is recommended for a few days / weeks to stay in some souse, by which it will be better in taste. After drying of it and of humidity, meat is hung or laid on the smoking ventricle.
There are cold, warm and hot procedure of smoking. Generally, cold and warm are considered to be the most common ways of smoking. In ventricles that fire is lit in the bottom (or separated space for lighting fire), there must be constant watch-over that fire isn’t too strong (or too weak), while at ventricles with electrical heater that is not the case. Dependable on the size of the meat and percentage of the ventricle used, there could be more than one smoking procedure.
In between the product that is smoked should be left to „rest“ before it is continued with the procedure – that is the question of personal preferences (and taste) when it the right time when it is considered that the meat is done with smoking. It has to have nice, soft color (not too dark) and light smoke aroma.
Generally, shorter smokings with less smoke on smaller temperature are better than long-termed and sudden smoking with big amount of smoke. It is similar to baking rakija: for a good result patientce is important, and you shouldn’t „rush“ the product.

With Grilloza Dym (galvanized or inox) we also offer sawdust (standard, spicy and premium) and Grilloza Dym lid with a fan so you can also use your Grilloza Dym for drying the products. 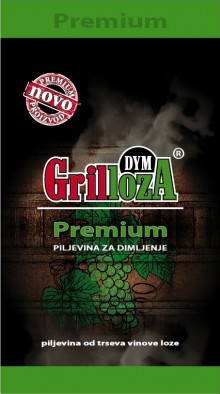 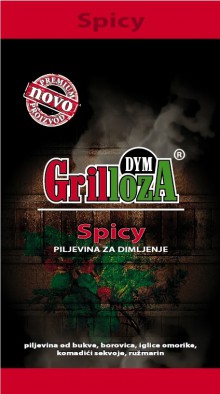 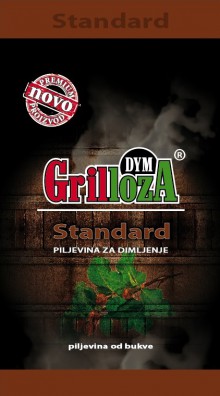 Grilloza Dym Premium is a sawdust for smoking made from vine sawdust. It is used in Grilloza Dym product.

Grilloza Dym Spicy is a sawdust for smoking and it consists from beech, juniper, spruce needles, pieces of sequoia and rosemary. It is used in Grilloza Dym product.

Grilloza Standard is a sawdust for smoking and it consists from beech sawdust. It is used in Grilloza Dym product.

Order Grilloza Dym
Back to home